The recent series of tornadoes across the Midwest damaged some agricultural infrastructure, including barns, grain silos, livestock facilities, and machine sheds.

In Iowa, reported damage to grain silos occurred mostly near the top of the structures, per the Des Moines Register. Since most silos were full or near full of corn or soybeans, they had enough mass to withstand record winds without toppling over or breaking at the seams, limiting grain losses.

With lids either missing or partially missing, the grain inside the silos was exposed to the elements, raising concerns about high moisture levels and excess foreign material. Mayfield Grain Company’s Kansas facility, which handles about 6 million bushels of corn, had more than half its lids damaged or destroyed by a storm in early December.

Just over a year ago, in August 2020, a derecho storm swept through central Iowa, tearing apart grain storage and damaging millions of corn and soybean acres prior to harvest.

Had this year’s tornadoes and record winds occurred just a couple of months earlier, prior to 2021/22 harvest completion, the impact to corn and soybean supplies would have likely been much worse. An accurate account of grain loss due to this year’s storms is still being gathered. 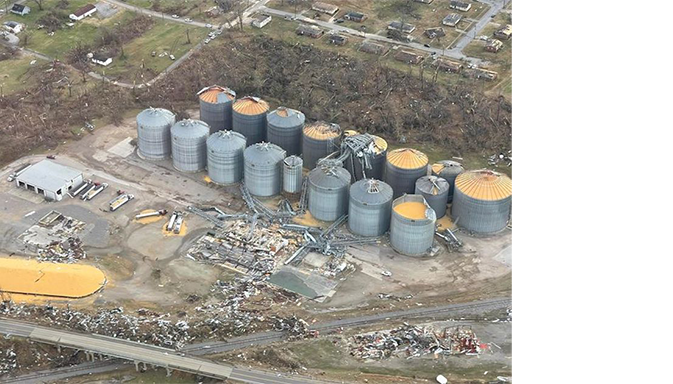