Repeating February’s performance, every subindex showed month-on-month gains in March, with the vegetable oils, cereals, and meat indexes all reaching individual record highs. In addition to question over supply due to the Russia-Ukraine war, markets have been roiled by concerns over weather in key regions and higher input and shipping costs. As in past coverage, we will discuss FPI figures in real terms, adjusted for inflation, unless otherwise noted.

Building on its runup in the back half of 2021, the oils index saw the steepest gains, up nearly 54 percent YOY. Pricing has strengthened for sunflower, palm, soybean, and rapeseed oils, with the Russian-Ukraine war adding support for sunflower oil, while concerns over South American crops is still supporting soybean pricing.

Up 35 percent YOY in March, grains also appreciated strongly, unsurprising given the prominence of Ukrainian and Russian exports. Ukrainian plantings for row crops, market watchers fear, could fall by 50 percent or more if the Russian invasion continues through the critical spring planting period. As with oils, a tight global energy market while the Russia-Ukraine conflict continues will further support grains markets. Per USDA estimates, Russia and Ukraine accounted for 19 percent and 8 percent, respectively, of all wheat exports in 2020/21. Ukraine accounted for 13 percent of exports, edging out Brazil for the spot as the third-largest corn seller.

Sugar pricing broke out of a three-month slide, rebounding in March to a three-month high, up nearly 21 percent YOY. The continued growth of cane ethanol production has tightened the relationship between crude oil prices and sugar prices. 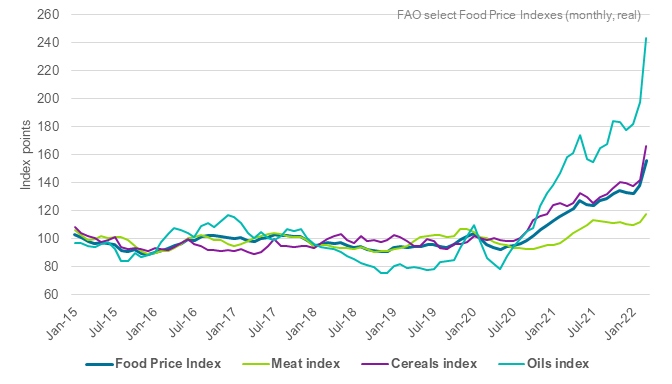