Although news of an explosion and fire in a Freeport liquified natural gas (LNG) loading terminal off the coast of Texas would initially appear bullish, in-depth analysis would suggest that the event has instead shifted the momentum of the domestic natural gas market.

The Jun. 9 explosion caused a fire and subsequent damage in the transfer pipes connecting liquified natural gas (LNG) tanks to port loading facilities. Refining capacity, liquefaction trains, and the storage tanks themselves were reportedly not damaged. In the immediate aftermath, the site operator, Freeport LNG, announced that the damage was minimal and that the facility would be back online in about three weeks.

That estimate proved optimistic, however: After a more thorough assessment of the damage and needed repairs, the facility is now expected to remain offline longer for repairs, permitting, and inspections. Company officials now project a return to partial operations in about 90 days. This development was the catalyst for a collapse in pricing in mid-June.

The Freeport facility represents some 20 percent of the country’s LNG export capacity, mostly destined for mainland Europe and some for Asia. While the loading facility remains offline, LNG shipping from the port is halted. With extraction, refining, and storage not affected, an additional 2 billion cubic feet (Bcf) of gas may instead be added to U.S. stocks each day, bolstering domestic inventory levels that had lagged due to growing exports.

After the most recent announcement, the tone of the domestic gas market immediately shifted, plummeting over 20 percent in a single day, as short-term demand is expected to drop while domestic production continues. Prices were in freefall, dropping from $9.00 per million Btu (MMbtu) to $7.00 per MMbtu in about an hour. The U.S. Energy Information Administration will likely raise its forecast natural gas stocks given the increase of 2 Bcf per day in build. By fall, stocks could be closer to the 3,100 Bcf five-year average.

Of course, summer heat will further drive demand for AC/electricity and gas-fired power generation, and hurricane season may also play a part in the coming months. Regardless, this is a golden opportunity for buyers to extend cover. 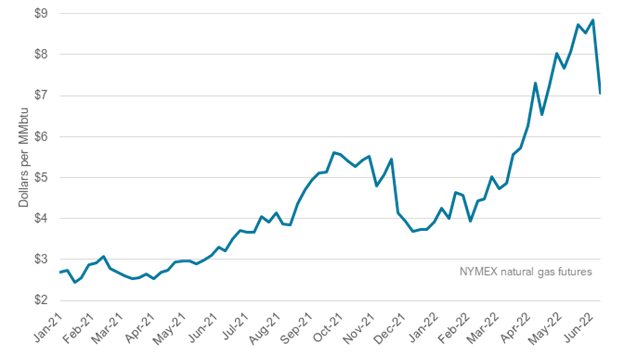