Forecasters calling for another active hurricane season this coming summer

AccuWeather released its first predictions for the coming North Atlantic hurricane season, which will begin officially in June of this year. Although not expected to be as active and severe as 2020‘s season, which saw the most named storms to strike the U.S. since 1916, the 2021 season is still expected to be more active than the 30-year average.

Breaking the data into decade increments, a clear pattern of increasing storm frequency and intensity can be seen. Many meteorologists attribute this to climate change brought about by burning of fossil fuels and changes to the environment. And 2020 was one of the costliest seasons on record, with an exorbitant number of storms that progressed in a constant stream in the height of last summer.

The duration and intensity of the coming storm season will depend on numerous climatological factors: The speed of the Gulf Stream current, temperature of surface waters over the tropical Atlantic Ocean, presence of the Bermuda high-pressure system, and the current phase of ENSO (El Niño Southern Oscillation) all play a role in storm system formation.

Compounding the storm forecast is the slowdown in the Gulf Stream up the Eastern seaboard, which will tend to concentrate and slow the forward progress of storms as they spin up and off the coast into the North Atlantic. This could drive more storms to regions off the Atlantic coast and Gulf this coming summer.

AccuWeather meteorologists are projecting 16 to 20 named storms and seven to ten of hurricane intensity. Three to five of these hurricanes are expected to reach major status or intensity (three or higher on the Saffir-Simpson scale, with winds above 111 mph). Colorado State University researchers will be releasing their own forecast on Apr. 8. It will be interesting to compare that forecast with AccuWeather’s. 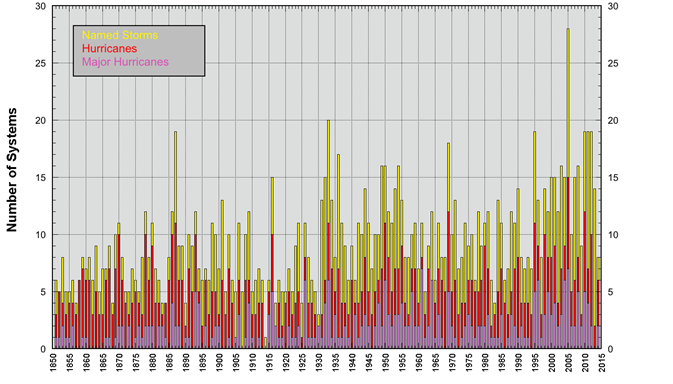