FAO’s Food Price Index (FPI) rose again in February, growing 3.9 percent from January to reach a new record high (unadjusted for inflation). February’s FPI was up 20.7 percent YOY, largely on-trend since the FPI has now risen in 17 of the last 20 months.

The real FPI, adjusted for inflation, was up 18.7 percent YOY in February. All the subindexes were up by a point or more in February—except for sugar, which was down almost 2 percent. The indexes showing the biggest relative gains were oils and dairy.

The oils subindex is now up a very strong 34.5 percent YOY, supported by strength in soybean, palm, and sunflower oil prices on concerns of overproduction in South America, Indonesia, and the Black Sea region, respectively. Support for crude oil from the Russian invasion of Ukraine, of course, can also translate to further support for vegetable oils, pushing the subindex to a new record.

Unsurprisingly, the grains subindex continued its rise in February, up 12.9 percent YOY and at its highest levels since mid-2008. The market was already concerned over global wheat supply, and the invasion of Ukraine—involving two of the world’s top wheat exporters—has added to those concerns and to support for most grains, even those had that seen less strength over the past year.

Despite presumed support from price strength for crude oil and other energy markets, the real sugar subindex fell for a third straight month to an eight-month low. The subindex is still up 8.6 percent YOY. The crop outlook remains favorable in Southeast Asia, and conditions seem to have improved for Brazil. Our own forecasting pegs India, Thailand, and Australian production at three-year highs, while diversion to ethanol may put Brazilian production at a three-year low. 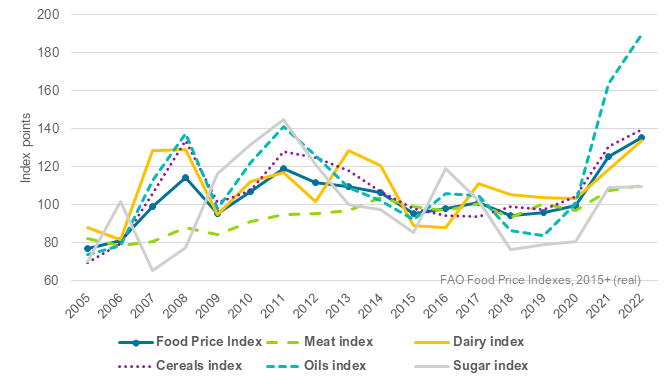