FPI for all of 2022 was still up nearly 12 percent YOY and up nearly 37 percent from the multiyear average after two years of double-digit growth for each of the five subindexes. The FPI and most of its component indexes reached new records in calendar 2022—the sugar index was the lone exception.

Returning to monthly performance, the cereal index was down in four of the last six months. Competition from South American crops is thought to have weighed on prices for wheat and corn, which in turn pressured sorghum and barley, though currency changes and export demand supported rice prices. Naturally, the continuation of the Black Sea export deal has helped keep a lid on grain prices.

After gains in Q1 2022, vegetable oils prices have been down in eight of the last nine months, reaching their lowest level since January 2021. Quoted prices were reported down for soybean palm oil, canola, rapeseed, and sunflower oils. Though heavy rains weighed on production out of some major origins, world export demand has been lackluster, leading to significant depreciation in December.

The sugar index rebounded in both November and December, reaching a six-month high, supported by market concern over processing delays in Thailand and Australia and unfavorable weather that could curb yields in India. 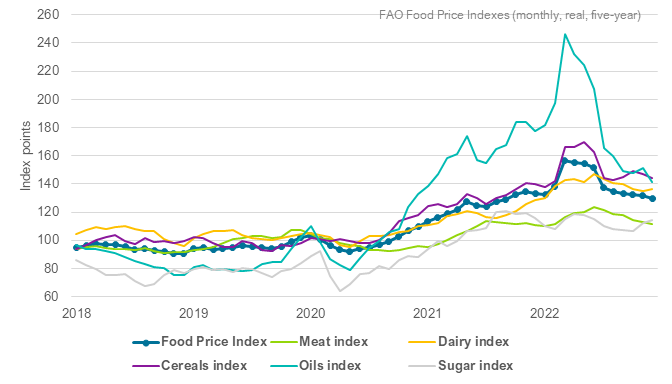