In its May WASDE report, USDA revealed the 2022/23 season projections to its report while making no notable changes to the current season’s forecast.

USDA’s first projection for 2022/23 U.S. corn production was 14.460 billion bushels, down about 655 million bushels from the current season’s estimate—the result of lower forecast planted and harvested areas. These reductions may be partially due to rising fertilizer costs and an increase in competing crops like soybeans.

The U.S. soybeans production estimate for 2022/23 was 4.640 billion bushels, up about 205 million bushels from the current season. Area planted and harvested were up vs. the last two seasons, while the yield is seen marginally higher year on year. Beginning stocks were projected down 22 million bushels YOY at 235 million bushels, the most notable difference between the old- and new-crop estimates. 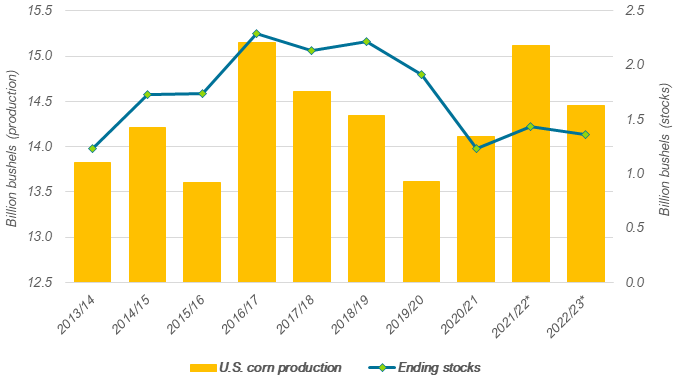