NOPA crush last month was around expectations at 165.1 million bushels, with the short month bringing the usual month-on-month decline in processing. February crush was the second-highest volume for the month, however, behind February 2020.

Soybean oil yield was a very strong 11.93 pounds per bushel, which allowed oil production of 1.97 billion pounds to set a record for the month, surpassing February 2020 by almost 60 million pounds.

Soybean oil stocks ticked higher, with 33.3 million pounds added to stocks during the month. Oil stocks remain notably higher than levels we’ve seen in recent years due to an unusual rise during Jul-Sep 2020/21, which started off this season’s stocks volume at a high level. February’s 2.06 billion pounds of soybean oil stocks was NOPA members’ highest since April 2020. 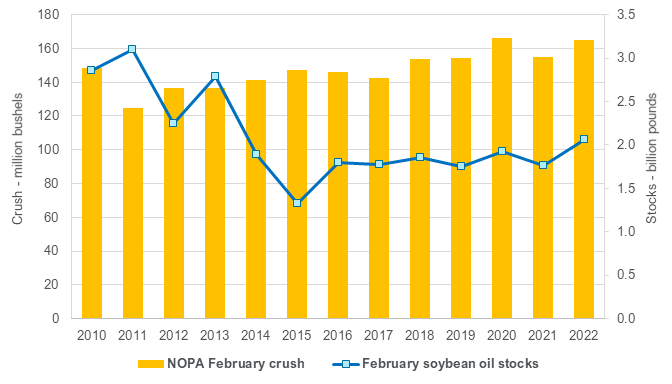 
Posted by: Information Services
Our Information Services team assists our clients with understanding commodity and ingredient market dynamics. Using our extensive database of intelligence, we also produce regular commodity and commercial market publications covering supply and demand fundamentals, news alerts on events that shape the markets, and resource guides to give you a complete picture of the industries we monitor.