USDA’s milk production report showed some interesting results through February, but the 29 days in February 2020 make it more difficult to draw meaningful conclusions.

Before talking about the results, it is worth revisiting the changes made for January 2021, which many in the market were inaccurate or understated. After corrections, the dairy herd was up by 5,000 head from initial reporting, and total milk output for the month was seen up 2.5 percent YOY. These adjustments raised milk output by nearly a full point and calls into question the accuracy of USDA statistics, at least as initially released. Last month, brokers and traders saw the report as bullish with more milk than expected. That milk volume is now showing up, but traders’ memories are notoriously short, and we suspect attention will turn to the more recent month merely for convenience.

However, comparing February output year-on-year is not as easy as February 2020 gives an extra day’s production due to leap year. We can instead focus on daily normalized production levels and total herd size rather than absolute milk output over a different number of days.

Daily output across all 50 states averaged just over 66.5 lbs of milk per cow per day. The herd expanded by a nominal 3,000 head from the prior month. Total milk production was 17.6 billion lbs, just under last year’s result–without excluding for that extra day. 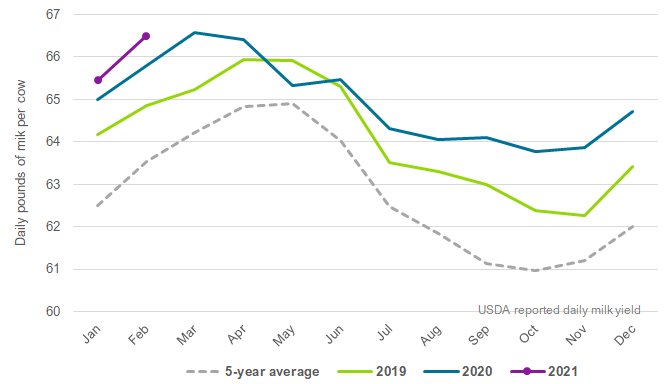