Adjusted for inflation, FAO’s Food Price Index (FPI) fell 1.9 percent from July to a seven-month low but was still up 6% YOY. This is a change from prices in July, up 11 percent YOY, and from May and June prices, up 20 percent YOY. As in July, every subindex fell in August vs. the previous month.

Grain prices fell modestly in August, the third down month for the cereals index. The decline was led by a 5 percent drop in world wheat prices, also for the third straight month, as both North American and Russian crops are reported in fair condition and as shipment of wheat from Ukrainian Black Sea ports continue. FAO reports that wheat prices are still up nearly 10 percent YOY. Corn appreciated on hot weather in EU and North America, though partly restrained by shipments out of Ukraine, while barley and sorghum prices also fell.

The vegetable oils index showed the steepest month drop MOM in August, down 3.3 percent from July. More notably, the index was also down YOY for the first time since spring 2020. Per FAO, lower prices for palm, canola, and sunflower oils drove this fifth month of oils depreciation. Supply from key export origins, such as Indonesia for palm and now Ukraine for sunflower, have helped curb prices along with potential pressure on world demand. Partly offsetting this decline, soybean oil prices have shown more strength on poor weather and the potential for lower soybean yield in North America.

The sugar index fell for a fourth month to a 14-month low on added exports out of India and cheaper ethanol in Brazil. Weather could further pressure production in Brazil and Europe, however. 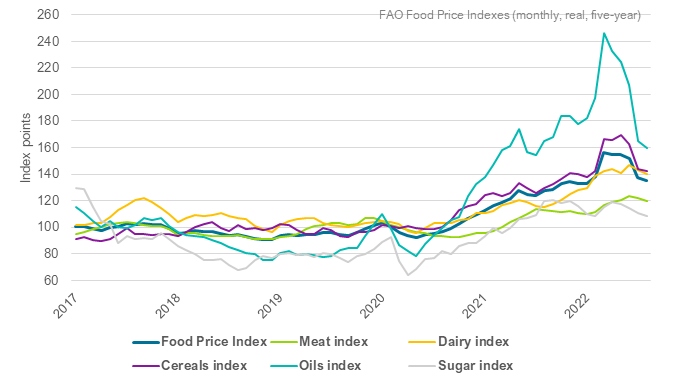