FAO Food Price Index down in May for second straight month

FAO’s Food Price Index (FPI) was reported down over half a percent in May, adjusted for inflation, the second straight monthly decline. May’s FPI was still up 20.8 percent YOY, supported by significant gains across all subindexes.

Food commodities showing the most significant YOY gains include vegetable oils and cereals, though all are showing double-digit percentage growth year on year. (As a reminder, our analysis is based on inflation-adjusted prices.)

The oils index fell for a second straight month in May on weaker prices for palm, soybean, sunflower, and canola oil. The lower prices suggest some demand weakness, possibly due to demand rationing or destruction, and the evolving supply pictures—e.g., the lifting of Indonesia’s brief palm oil export ban, which has not issued permits for 179,464 MT of exports as of Jun. 2, per Business Times. As a reminder, Ukraine is typically the world’s top supplier of sunflower oil, and the Russian invasion added to supply uncertainty. Following a poor Canadian canola crop and an expected drop in its oil exports, Australia is reportedly considering stepping up its imports with a 21 percent jump in plantings, per Rabobank.

The sugar index fell in May and has seen only two up months in the last half year, so this subindex has seen the lowest growth YOY. A large crop expected for India and a weaker Brazilian real, coupled with flagging ethanol prices, could be helping pressure world pricing, FAO suggested. 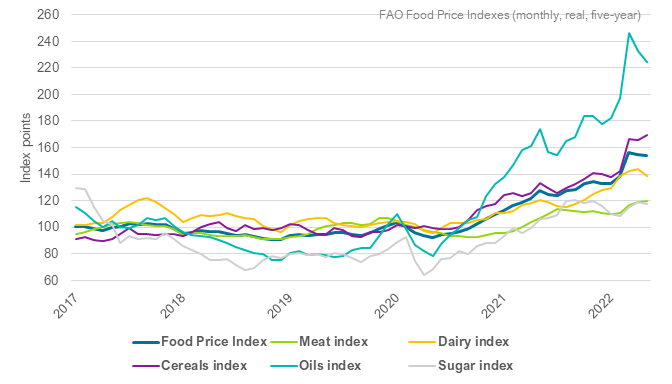