All but two components of FAO’s Food Price Index (FPI) fell in November, allowing the overall index to slip slightly from the previous month. The combined FPI has now seen monthly declines from April through November, and though this included drops of just 0.1 percent (adjusted for inflation) in the last two months, November’s monthly FPI was down 1.4 percent YOY—the first YOY decline since July 2020.

Prices in 2022 to date were on average up about 13 percent YOY and up about 38 percent from the five-year average.

In November, the cereals, meat, and dairy indexes were down from October, while the oils and sugar indexes were up moderately. Notably, the rebound in oils prices followed some very steep declines earlier in the year.

Over the past year, the cereals index has seen both falls and rebounds and as of November was down about 13 percent from its all-time high set in May 2022. The continuation of the Black Sea Grain Initiative helped pressure grains prices, as did some relief from delays in barge transport in the U.S. More competitive prices from other origins, partly the result of dollar strength, have continued to weigh on U.S. exports. The grain price index is still up nearly 5 percent YOY.

Price for edible oils did rebound moderately in November, though this correction higher follows seven months of declines that had the index down nearly 20 percent YOY in October; after the rebound of over 2 percent, the index is now down nearly 18 percent YOY. The November rebound was mainly due to higher palm and soybean oil prices, though rapeseed and sunflower oil did offset some of those gains thanks to strong supplies and the Black Sea deal.

Following six months of declines, sugar prices rebounded in November by over 5 percent. In October sugar pricing was down 10 percent YOY, but pricing in November is up nearly 7 percent YOY. Delayed harvesting in Brazil and a sugar export quota from India—initially, 6 MMT and shortly after raised 8 MMT—supported world pricing. 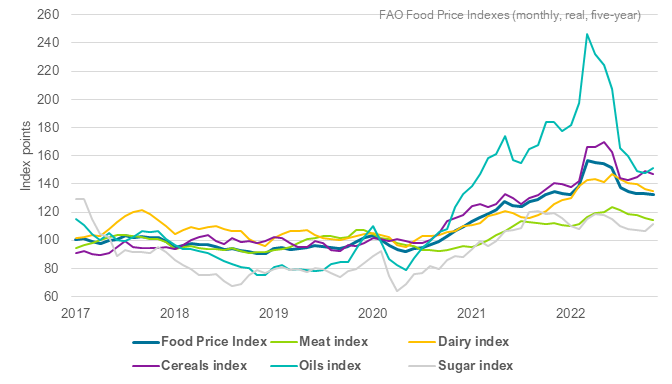