Production has been a bit sluggish this summer, and manufacturers tend to slow activity in September, so last week’s decline is not unusual in and of itself, but the drop was steep enough to consider that the industry may feel that stocks are still too high given the state of demand.

Ethanol use by blenders and refiners has been below average (excluding anomalously low use in 2020) due to the decline in U.S. gasoline demand since April. Four-week average motor gas demand as of Sep. 16 was 8.533 million barrels per day, down 8 percent year over year. In 2019, when we saw peak ethanol utilization, four-week average gas demand was 9.391 million barrels per day, 10 percent higher than current demand.

Ethanol stocks have been declining, reflecting lower production as well as higher exports this year. Stocks were below 23.0 million gallons for Sep. 9 and Sep. 16, the first two-week period below that threshold since the beginning of the year. At this level, however, stocks are where they were in 2019, when demand was stronger. 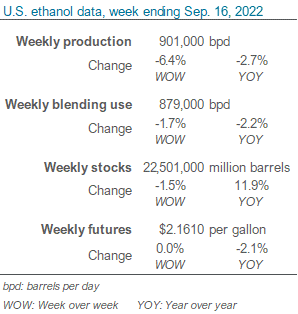 Ethanol ending stocks vs. production & use 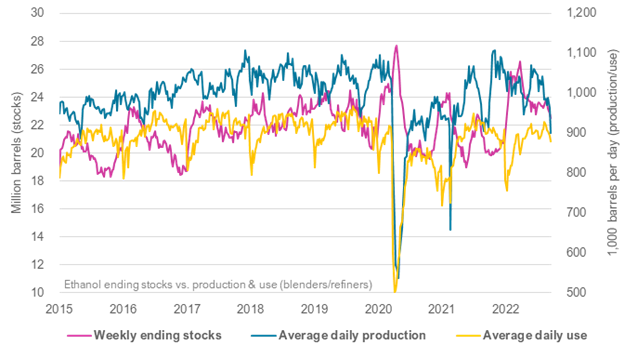