Energy markets in the crosshairs of the Ukrainian crisis

The effects of the Russian invasion of Ukraine that began two weeks ago are spilling over into global markets, creating massive volatility for corporations to navigate. Crude oil prices traded up to $130 per barrel this past week to a 15-year high as the U.S. announced an immediate ban on imported oil from Russia: No new contract will be permitted, and existing contracts must be phased out within 45 days. The UK announced a plan to phase out imports of Russian oil and oil products by the end of the year.

Large multinational branded CPG (consumer products group) companies have suspended operations in Russia in reaction to the humanitarian crisis unfolding as civilian refugees attempt to leave Ukraine. These companies include PepsiCo, Coca-Cola, GE, Starbucks, and others, not to mention all the major credit card companies. Final approval of the new Nord Stream 2 natural gas pipeline, intended to bring natural gas from Russia to Germany—without going through Ukraine—was immediately halted by German authorities. Natural gas prices rapidly traded up to $5.00 per mmBTU in reaction to market expectations, which include concerns that Putin may retaliate against NATO economically by withholding exports of natural gas to Western Europe.

In the U.S., the impact can be felt most immediately in the prices consumers pay to fill up their gas tanks. Gasoline prices moved sharply higher, setting national-average record highs, with most regions climbing close to $4.35 per gallon (regular unleaded), approaching $6.00 per gallon in areas like California.

In a nationwide address, President Biden said that economic sanctions and a ban on imports of Russian crude will have an immediate impact on all Americans and what they pay for gasoline, home heating oil, natural gas, and other crude derivatives. Likewise, freight fuel surcharges will be implemented for shipping across the nation. The normal price hike that typically coincides with the busy summer-driving peak (Memorial Day through Labor Day) appears to be arriving two months earlier than usual. The only piece of good news over the past fortnight are gradual warming weather and a forecast for mostly above-average temperatures in the second half of March, suggesting that winter is rapidly drawing to an early close and allowing oil prices to ease back to $110 per barrel near the end the week. 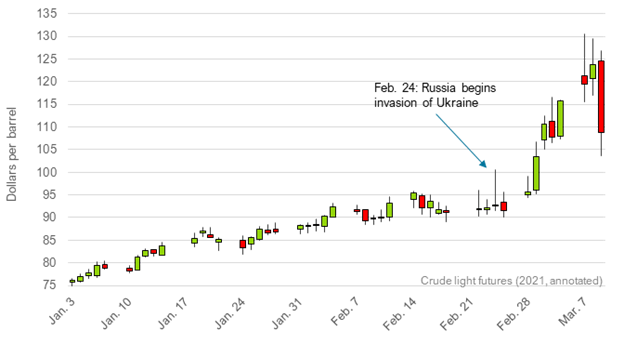