The U.S. imported more canola, palm, and sunflower oils in March but pulled back on deliveries of coconut and palm kernel oils.

Canola oil imports are predictably higher this year due to lower domestic production. During the first three months of the year, U.S. processors crushed 431 million tons of canola seed, down 22 percent year on year, and oil yield was poorer, leading to a 27 percent decline in crude oil production compared to Q1 2021. In Q1 2022, U.S. crude canola oil imports totaled 73,734 MT, up almost 50 percent from Q1 2021, and imports of refined oil were close to 395,000 MT for Jan-Mar, up 8 percent.

Palm oil imports were above last year’s Jan-Mar total and closer to average for those months thanks to strong deliveries during January. Demand for palm oil in edible applications is not much different from a year ago, but more palm oil this year is going to inedible use.

Use of PKO in processing is down a bit year over year but still higher than historical levels. However, the increase in price has perhaps discouraged importers from building stocks. In terms of imports’ CIF value, refined PKO in March averaged $1.03 per pound, up from 82 cents in February and now very close to imported refined coconut oil pricing.

Domestic use of refined coconut oil during Q1 was about the same as Q1 2021, but while imports were much higher YOY during Jan-Feb, a notable price hike in March (the value of refined oil was up 16 cents per pound on average from February) contributed to a downturn in imports for the month. Among U.S. processors, demand for coconut oil shifted a bit lower in 2020, ceding some market share to PKO. Although we’ve seen a dip in utilization of PKO over the last few months, the drop in volume has not partnered with an increase in use of coconut oil. 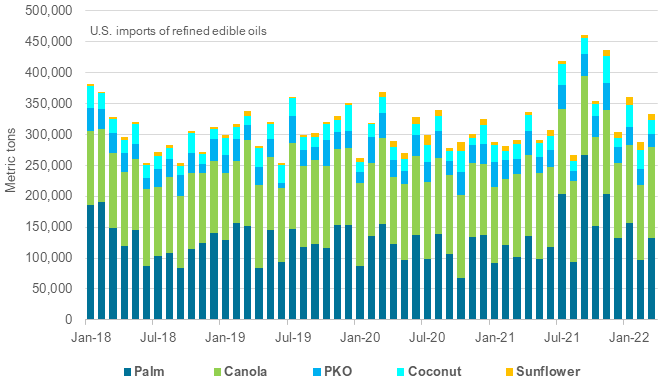