Four months into the West African main crop, cumulative tallies from both Ivory Coast and Ghana are telling two very different stories. Cocobod announced this past week that Ghana cocoa arrivals trailed last year by 44 percent, down nearly 300,000 MT year on year. Although last year was a record crop for Ghana, officials cited prolonged dry weather as the reason that pod production is down this season. However, this news appears to conflict with news that Ivory Coast port arrivals through January were almost caught up with arrivals a year ago.

The two top cocoa origins, the two countries share a common border, similar geography, and the same weather patterns, raising the question of why they report these differences. One country lags only a few percentage points behind last year, while the other is only seeing half of last year’s production. It would seem that either one country is overestimating its arrivals volume or the other is underestimating. The truth probably lies somewhere in between, and blending datasets into a composite figure for a yearly comparison would be one logical approach.

One consistent theme are concerns voiced by officials from both countries following a second week without rain, with conditions turning much drier as the Harmattan season progresses. Drier weather may hurt pod development for the upcoming midcrop, and exporters are already seeing higher beans counts of 110 to 115 beans per 100 grams. Smaller bean size is a direct result of inadequate precipitation as trees struggle to get sufficient moisture to support both canopy health and proper pod development.

Clearly, investment in new facilities and origin cocoa processing capacity has taken place. But as these countries consume more beans and convert beans into semi-finished products, it makes sense exported bean volumes drop. Buyers should be prepared to see smaller crops from West Africa in the current season and fewer beans exported in favor of more products. 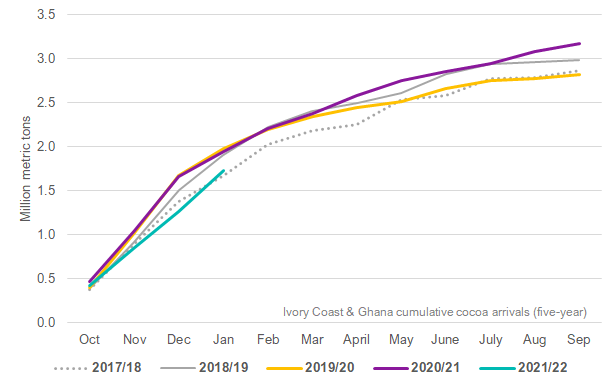