Brent crude oil futures surged this past week, topping $81 per barrel, a level not seen since 2014, making a contract and yearly high after the most recent OPEC+ meeting. The OPEC+ Joint Technical Committee (JTC) met ahead of the regular member meeting to assess fundamentals and market conditions and make a recommendation on output levels—and evaluate compliance. The group agreed to slowly phase out production curbs and raise daily output by an additional 400,000 barrels per day starting in November. Despite calls from certain countries for still higher output to meet what they see as rising industrial and overall demand, the group ultimately moved forward on a more modest lift, seeking to balance stable pricing and faster output growth.

Incredibly, pricing has risen 400 percent since April 2020 as economic stimulus accelerated the pace of recovery following pandemic shutdowns. Due to COVID-19 restrictions, some OPEC+ members have underinvested in large infrastructure projects, which will limit their short-term ability to ramp up extraction. However, with such price appreciation, the JTC will need to keep closer tabs on member countries looking to cheat the system and by exceeding targeted output levels in a seller-friendly market.

After multiyear highs, crude oil prices did pull back midweek with an unexpected rise in U.S. stocks but resumed their climb later in the week. U.S. oil and distillate inventories climbed to 421 million barrels, according to EIA reporting. Stocks are still about 7 percent below the five-year average, and refineries are running at around 90 percent of operational capacity.

After an active first half of the North Atlantic hurricane season from June through September, storms are now tacking a more northern track as they cross the Atlantic and will hopefully avoid key petroleum-producing Gulf Coast states. Higher crude oil prices should lead to the reactivation of rigs and more active rigs overall, bolstering U.S. output levels in coming months. The U.S. is also importing an average of 6.5 million barrels per day over the last month, up 22.7 percent from a year prior. This is a clear indication of higher industrial demand as the country gets back to work. One thing to keep in mind is the pending Fed tapering and rising interest rate environment that could pump the brakes as we move into 2022. 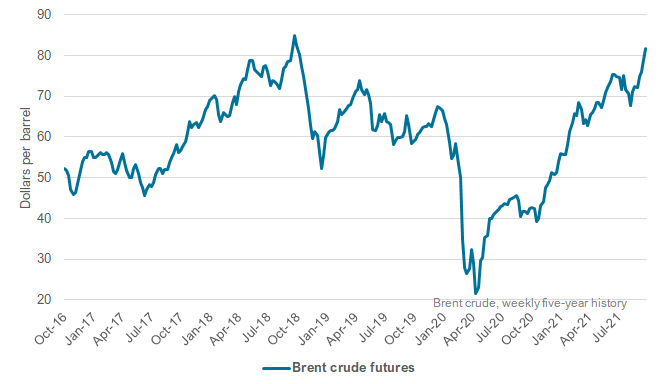