Crude oil over $120 per barrel as China slowly reopens

Saudi state-run oil company Aramco raised prices to both European and Asian customers this month and signaled that prices could rise further as China slowly relaxes strict COVID lockdowns and reopens its economy, raising its oil demand. New-contract Arab light crude oil prices were up $2.10 per barrel (bbl) for customers in Asia and by $2.20 per bbl for European destinations. Of all the OPEC members, Saudi Arabia may have the most additional capacity that can be tapped at this time.

Although Russia is also a large producer and traditional exporter, its invasion of Ukraine and ongoing war have sent it to the penalty box, excluded from contracts to many regions. OPEC did announce a production increase for July/August, raising output from 400,000 to 648,000 barrels per day, but many members are struggling to hit their target levels, so the market may not see that additional volume. In recent months, member countries missed the monthly goal by a combined 2.6 million barrels.

With the heavy driving season now upon the U.S., Goldman Sachs analysts raised their target benchmark prices for Brent crude oil to $140 per bbl. The national average price at the pump across most states recently set a record high above $5 per bbl, and this could mean the price will rise further. In many western states, gasoline prices are already significantly higher than the $5 national average.

The Biden administration released a whopping 180 million bbl from the Strategic Petroleum Reserve (SPR) over recent months to slow price escalation at the pump. Although partly successful, the release failed to push prices lower, and now the country is faced with having to replenish its reserves with oil at its highest prices in 15 years. The Department of Energy (DOE) plans to buy 60 million barrels for the SPR: A larger reserve is preferable ahead of peak hurricane season and the pickup in seasonal heating oil demand. Consumers have experienced sticker shock at the pump but have yet to feel the brunt of higher monthly AC power bills as summer heats up or of soaring heating bills this winter. 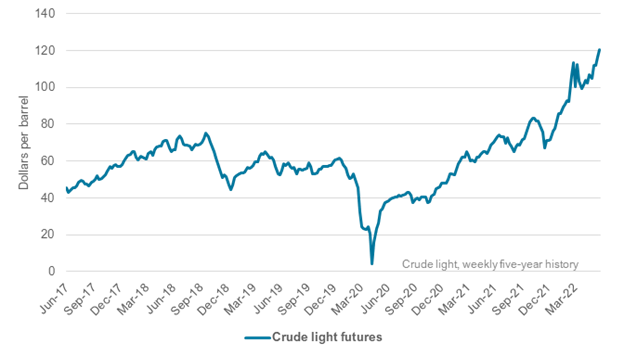