For a traditional Thanksgiving dinner, the cost of a turkey (16 pounds) is estimated at $28.96, up about 21 percent YOY—though people buying this week will likely find a better deal than buyers a few weeks ago. Several factors have made turkey more expensive: a smaller flock, higher feed costs, and lighter processing weights, per AFBF.

The smaller flock is itself partly due to the spread of HPAI, Highly Pathogenic Avian Influenza, which drove the destruction of some 44 million farm fowl across 39 states. Minnesota, a top turkey producer, has lost hundreds of thousands of turkeys in recent months, helping push turkey breast meat up by over 50 percent YOY, per a CBS report. Higher feed costs, meanwhile, are partly the result of the Russian invasion of Ukraine and other disruptions roiling global supply chains.

AFBF is now also including other ingredients—ham, green beans, russet potatoes—for a more modern meal. Per its survey, that expanded meal’s ingredient cost will be $81.30, up 12.6 percent YOY. 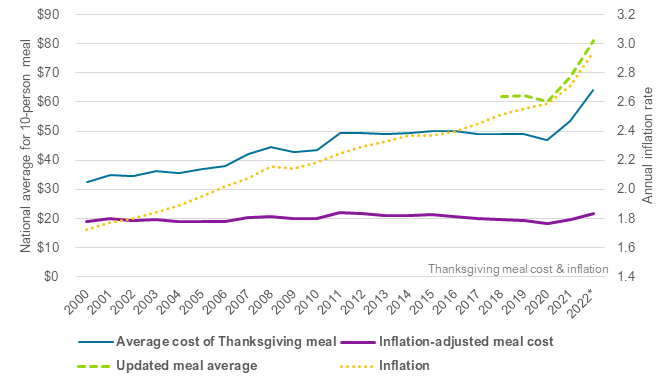