As of Oct. 24, two-thirds of the U.S. corn crop had been harvested, up 14 points from the previous week and up 13 points from the five-year average for the week. While a one-week, 14-point gain in corn harvest progress is not unusual, it reflects quite an effort out in the field, especially given this year’s acreage. Corn growers in Iowa progressed from 43 percent to 60 percent harvested, while Illinois moved from 62 percent to 78 percent, Nebraska from 41 percent to 60 percent, and Indiana from 45 percent to 57 percent.

All that work to harvest corn diverted some energy from the soybean harvest, although pace is still ahead of average. As of Oct. 24, about 73 percent of soybean acreage had been picked, up 13 points week over week and up 3 points from the five-year. Harvest progress had been a bit faster earlier in the month, and some states are close to done with soybeans, including Minnesota’s harvest at 95 percent complete and Iowa at 83 percent. Illinois and Indiana are slower than average—Illinois’s soybean harvest was 68 percent complete vs. 77 percent for the five-year and Indiana was 63 percent vs. 72 percent—but the pace should pick up again as labor can be spared from corn. 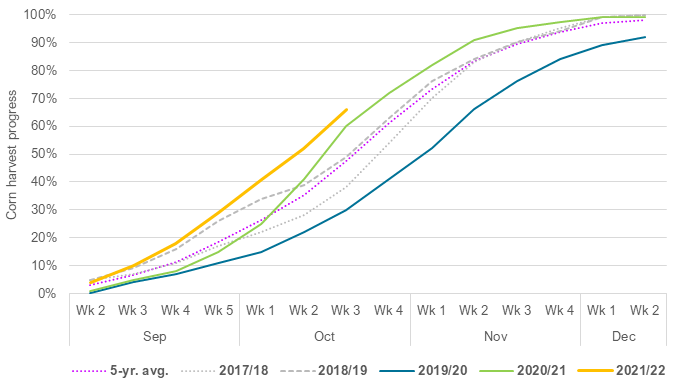