Although Mar. 20 was the official start of spring and next week will be the first full week of May, you wouldn’t know that if you were in the Northern Plains over the past month. Multiple late-winter storms have plagued the region, bringing plenty of additional snow and freezing temperatures across broad regions from the Rockies to the Great Lakes.

At a time when people are usually tuning into the crop progress report to track plantings, they were measuring snow accumulation instead. Obviously, snow on the fields will delay tilling and planting progress. Once the snow melts, the saturated ground will need to dry enough for farmers to get tractors in the field without being encumbered by too much mud. For those crops that have a longer growing season and need additional time in the ground, the late start poses some complications for the growing season this summer. Conditions will need to cooperate in a shorter window this summer, with sufficient growing degree days and an optimal mix of sun and rain to make up for lost time.

Corn and sugar beets are two crops that seem to be lagging both last season and the statistical average. Requiring a longer growing season than soybeans, corn is more vulnerable to a later start than most crops. At only 7 percent planting as of Apr. 24 across the 18 top states, the U.S. is lagging both last season (down 16 percent) and the five-year average (down 15 percent) by a wide margin. The only meaningful emergence thus far was reported in North Carolina and Texas, with most states still far too cold for any progress.

Sugar beets are in a similar situation, with many growing regions seeing fields blanketed by snow into late March from the Red River Valley through Minnesota. Through the last week of April, sugar beets were only 11 percent planted across the four-state total, with the meaningful progress only in Idaho and no progress reported yet in Minnesota or North Dakota.

This is the slowest start to the season we have seen for sugar since 2014. Last year, we were already 41 percent planted by the end of April, so this year the growing window will be shorter, which perhaps raises the stakes for both yield and timing of harvest come fall and colder weather. 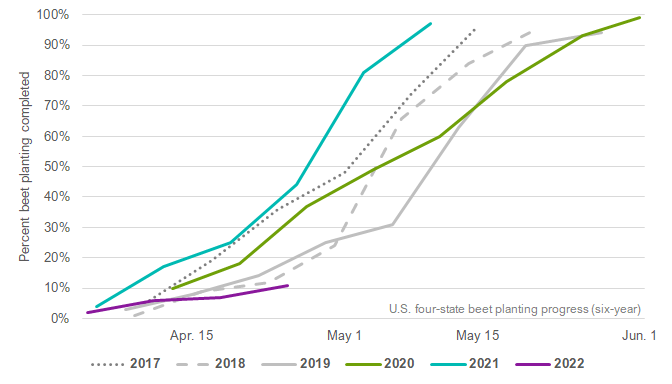