The two main headlines for cocoa market this week appear to be pushing in contradictory directions. Cumulative arrivals in Ivory Coast continue to underperform last year’s pace, reaching some 670,000 MT through the end of November. This is down around 10 percent from last year’s tally, although the weekly arrivals pace has improved.

An estimated 91,000 MT of beans arrived at major shipping ports in the last reported week vs. 94,000 MT in the same week last year. Farmers had expected arrivals to pick up during the height of crop, by December, but we are still not seeing arrivals above last year’s pace. This begs the question about what to expect for the balance of the main crop: Volume is down as we near the midpoint, and a deficit will be harder to fill in the remaining months. Arrivals could still make up ground in the second half of the season, but every week that goes by makes that less likely.

The disappointing arrival figures would normally lend a bullish tone to the market, but prices have been in a bearish phase since the end of November.

Given all the food inflation news and supply chain challenges, downside from the $2,350 level would seem limited, with no reason not to own most of 2022 outright. The net spec position turned negative toward the end of November for the first time in months, indicating that the market was highly oversold and vulnerable to a short-covering rally, as seen in the first week of December. The market was seemingly providing clear signals—both fundamentally, via arrivals, and technically, through fund behavior—for buyers to jump in and extend cover. 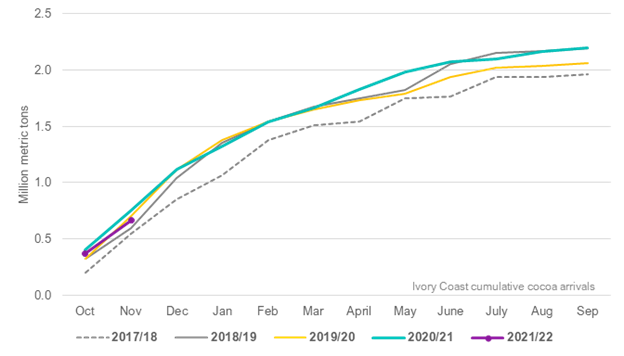