A few seasons into the implementation of a Living Income Differential (LID), Ghana and Ivory Coast have seen mixed results for premiums collected on bean sales. Despite some success for the LID in raising farmer income and improving livelihoods, country officials have at times had to offer steep discounts to sell sufficient beans in a timely manner.

So, while $400 per MT has been collected on bean export contracts for payment of the LID, recent years have seen a significant erosion of historical bean differential premiums. In many instances, the implied negative discount, combined with the LID, suggests that farmers are unlikely to be receiving the full intended LID. With Nigeria looking to join both Ghana and Ivory Coast in adopting LID payments, these countries will be focused further on maintaining successful cocoa premiums.

The premiums are a key source of income intended to help on a number of fronts: crop financing, pesticides, fertilizer, infrastructure and roads, deforestation, and social issues. Historically, in-country bean differential premiums ranged from $250 to $500 per MT depending on the size of crop and overall quality.

After the LID’s rollout, however, buyers were reluctant to pay both the extra $400 per MT and the typical premiums, and that differential market changed dramatically into a discount. After a meeting last month in Ghana between government officials and representatives of major branded companies, the cocoa regulators of CCC and COCOBOD may make a renewed push to restore the traditional premiums while maintaining the LID.

In a late-July announcement from Abidjan, Ivory Coast, the two largest cocoa producers stated that they would no longer offer discounted in-country premiums. Although negative origin differentials may be a thing of the past, it is unclear how successful marketers will be in restoring the full the bean premiums seen in the past. 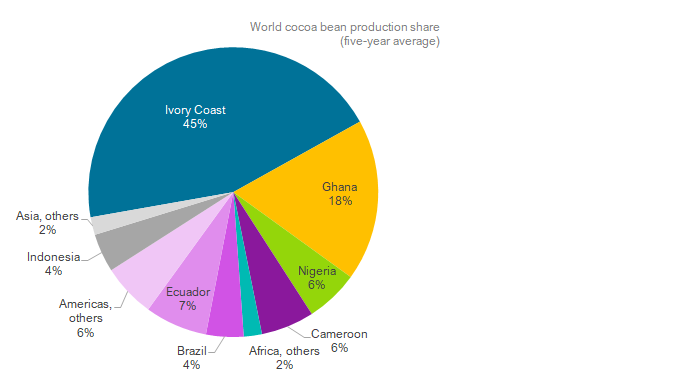