Cocoa grinds shrink at the start of 2022/23 season

Although many eyes are watching West African weather, the grind announcements from major reporting regions have had greater impact. If an analyst spends too much time on crops, weather, and other factors on the supply side, they can miss equally important factors on the demand side.

The reports on Q4 grind (October-December 2022) from the major reporting regions cover the first 92 days of the new crop year (October-September). Malaysia was the first individual country to announce its results, down 7.7 percent YOY, which contributed to the overall drop for the Asian region, down fractionally by 0.2 percent. This was the first down quarter for the region since Q4 2020 and is notable as the Asian region has seen the fastest demand growth over the past two years. Europe’s results were no better, down 1.7 percent and the second straight down quarter. This decline is also noteworthy as Europe remains the largest reporting region by grind volume.

North America grind was the last reported, but expectations were not high as this region had already seen YOY declines in every quarter of 2021/22. Grind in that region was reported down 8.1 percent YOY at 107,130 MT, the lowest volume since Q2 2009. One supposition is that more beans are being handled, roasted, and ground in origin countries, further curbing North American grind. This lackluster grind also contributed to physical tightness of cocoa products (liquor, butter, and powder) in the region.

In summary, all major regions’ grinds fell in the first quarter of 2022/23, and the bar is high for these regions to show YOY grind growth over the next six months. Collectively, world cocoa grind or consumption fell by an estimated 1.4 percent that quarter. Although market participants are worried that hot, dry weather across the main growing areas of West Africa, slowing grind and total demand will likely mitigate any impact from poor weather or smaller midcrops this season. We also suspect that previous forecasts calling for robust grinds north of 1 percent will need to be revisited given the disappointing start to the new crop year. 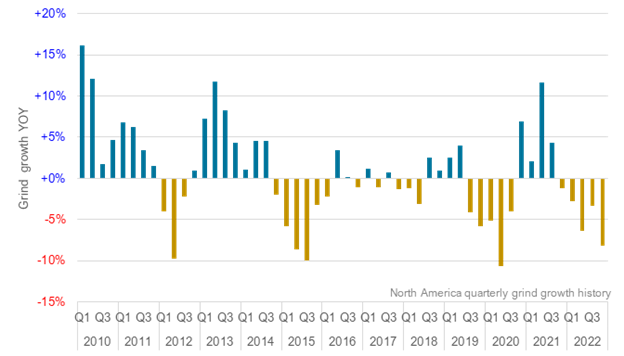