In the week of Dec. 27, managed money added to long positions and trimmed shorts. This left managed money net short for the fifth-straight week. Total managed money positions were down 13 percent from a month prior but still up by 21 percent YOY.

Mar-22 London cocoa traded lower in three of the four last sessions, following an inside session Wednesday with a drop to the lower Bollinger Band Thursday, also reaching a five-week low.

Through Dec. 26, Ivory Coast cocoa arrivals were estimated near 1 MMT, down nearly 6 percent YOY. Per Reuters, estimated arrivals in the week ending Dec. 26 totaled nearly 80,000 MT, up from 66,000 MT a year prior. 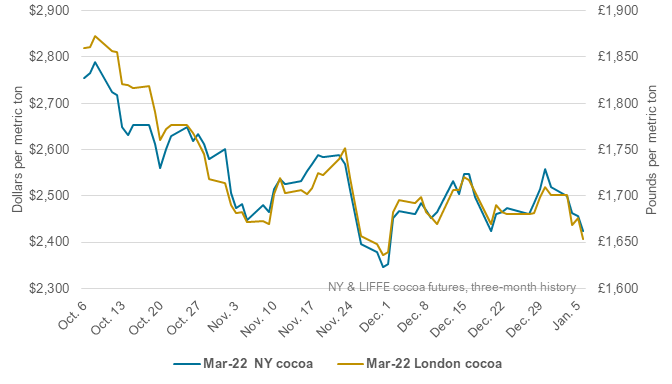