Improved weather, with rains returning from mid-June to early July, has brought relief to farmers across Ivory Coast. Recent crop estimates now place cumulative arrivals in Ivory Coast approaching 2.25 MMT to 2.30 MMT (gross), and Ghana purchase figures are expected to top 900,000 MT this season. Combined, those volumes would be one of the largest West African crops on record, topping 3.2 million from the top two origins.

Production in Ivory Coast has swelled over the past couple of seasons, with an estimated 15 percent of output now coming from nominal national parks and supposedly protected forests. Although cocoa regulator CCC has pledged to curtail cultivation in these sensitive areas, the Ivorian government seems to lack any means to remove farmers while avoiding humanitarian consequences. Meanwhile, cocoa is filling warehouses in the major port cities as power outages have hampered domestic processing and thus bean consumption.

Although GEPEX figures showed a 22 percent drop in the most recent monthly grind numbers, other major bean-consuming regions of the world report grind growth as the post-pandemic economic recovery continues. For Europe, the top use region, Q2 grind increased by a strong 13.6 percent vs. Q2 2020, exceeding analysts forecasts near 7.5 percent. 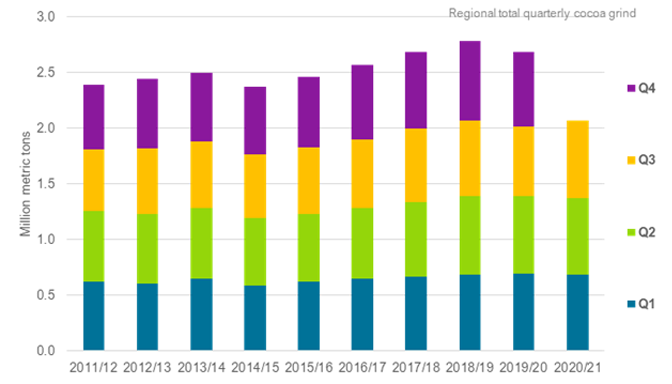