Summer brought searing temperatures across the U.S. as well as record-high butter prices north of $3.00 per lb. Despite strong milk production and respectable herd figures, prices rallied as AA butter inventories struggled to rise significantly over the prior year or the five-year average. After peaking in early summer, a drawdown in inventories prompted panic buying and shortages around the country.

Now, the Federal Reserve is raising interest rates again, slamming the emergency brakes on the economy, and a strong dollar is throttling most export opportunities for U.S. churning operations. Butter is finally seeing some measure of weakness as it comes to its senses, but buyers have had to be patient and endure a lot of pain on the way up. Although butter stood at only 267 million pounds by the end of September, traders anticipated a flood of imported butterfat at the start of the year, encouraged by the exuberantly high butter prices. Dairy coops are naturally nervous about competing with cheaper imported butterfat.

Turning to solids, the nonfat part of the equation, dairy protein/whey prices corrected lower earlier this year, with nonfat dry milk dropping more than 40 cents per lb. Butter saw a similar move lower over the past three weeks. Unlike the five-year lows for butter inventories, nonfat dry milk stocks are their highest since 2017.

Demand for functional dairy proteins slowed in response to record-high prices this spring, and as inventories started growing, producers grew increasingly nervous and finally discounted prices to generate sales. In the first week of November, the dairy product report showed skim milk powder at 273 million lbs by the end of September, up 12 percent year on year and the highest Q34 carryout since 2017. The drop in butter prices is mimicking precise moves by other dairy products. Peak holiday baking demand may still support Q4 butter prices, but the overall move lower in NFDM and whey may be foreshadowing butter’s fate in 2023. 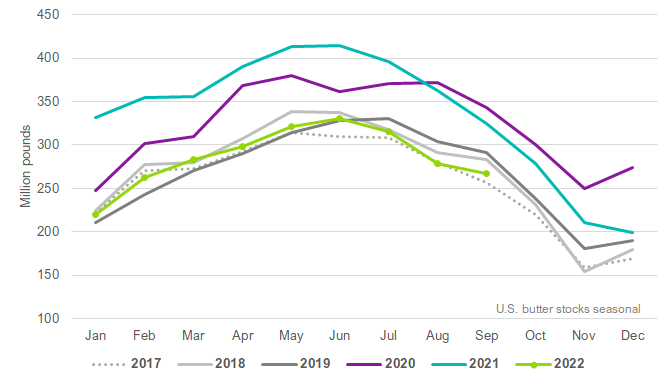