USDA’s recent transportation cost index update shows barge freight rates for grain are down by almost 50 percent from sky-high values seen in March, while grain trucking costs are still close to May’s record level. Rail costs are also around the May average and the highest level since 2014.

Stiff demand for corn and soybeans for export helped push barge rates up to 550 on USDA’s index (base year 2000) in mid-March, up from the February average of 395. The rise in export demand coincided with seasonally high-water levels on the Mississippi, which reduced the number of barges that could travel safely. Early June values for barge costs are averaging 245 on the index, reflecting a slowdown in demand for exports.

Truck freight is not showing similar signs of easing, however, as domestic demand for corn is quite firm at processors and ethanol manufacturers, and soybean crushers also consume healthy volumes. Trucking costs averaged 374 on the index in May, and June’s freight is poised to be around the same level. The shortage of truck drivers is an important factor in this situation, as wages have increased to help with driver retention. And while the U.S. heavy truck count has also increased, there are reports that truck orders are down as shipping companies take a pause to avoid an overcapacity situation.

Rail freight rates are currently around 318 on the transportation index, the same as May’s average. Although rail appears less volatile on USDA’s index—it’s more of a steady-ever-upward player—the last time rail rates were this high on the index was in 2014, when U.S. crude oil producers were jockeying for a larger share of rail capacity. 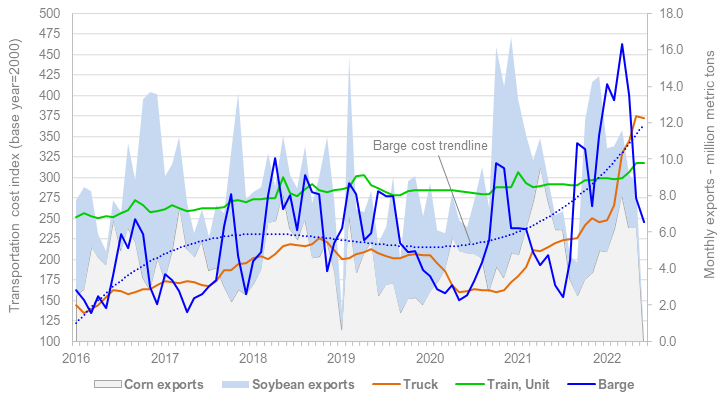