NOPA soybean crush and oil stocks figures for April came in below expectations.

Ahead of the processor report, crush was anticipated to be around 172 million bushels, but several plants were down for maintenance, per Reuters, which contributed to crush being just under 170 million bushels for the month. Despite missing expectations, April crush was still the second-highest for the month.

Demand for oil seems to have remained robust last month: Ending stocks were just 1.81 billion pounds, the lowest monthly level so far this marketing year and 1 percent below expectations.

USDA reported disappearance of soybean oil for edible applications totaled 1.39 billion pounds in March, up 10 percent YOY, and while we believe April disappearance was down from March, we still expect a YOY gain of around 5 percent. During the first half of 2021/22, processors removed 7.45 billion pounds of soybean oil for edible use, up almost 9 percent from H1 2020/21. 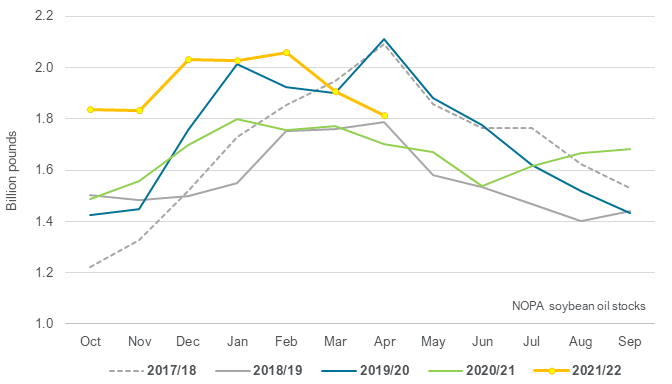