Net U.S. almond shipments were an April record at almost 250.0 million pounds, inshell equivalent, up 38 percent YOY but down about 6 percent from March. Including shipments, the industry sold position was over 84 percent sold on total supply at the begging of May, up slightly vs. a year ago.

Drought concerns have picked up in California, making the cost of production unviable for some almond growers. USDA’s subjective estimate for 2021/22 production was a record at 3.2 billion pounds, up 1 million pounds YOY.

It is uncommon to see record almond crops back-to-back as USDA projects, so many are taking the subjective estimate with a grain of salt, sighting the higher probability of lower yields in 2021/22 and the rising number of old tree removals.

For walnuts, net April shipments were a record at 62,361 tons, inshell equivalent, up 39 percent YOY but down 19 percent from March. In its first-ever position report, the California Walnut Board pegged the total industry sold position including shipments at nearly 92 percent of total supply as of May 1. 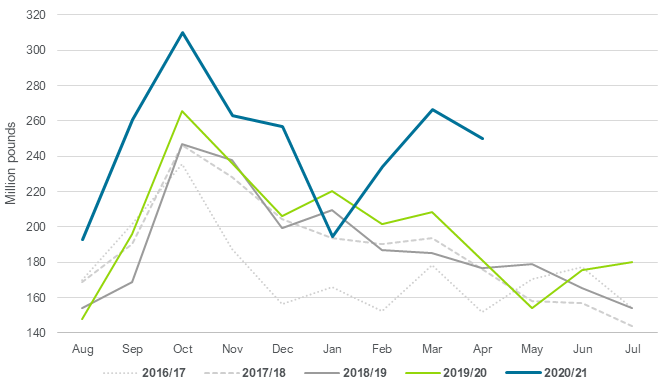