Through April, the U.S. had imported 239 million single-strength-equivalent gallons of apple juice, down 28 percent from 2019/20 to date and the lowest volume for Q1-Q3 in many years. Imports have been trending lower since 2018, under pressure from the trade dispute with China and from a loss of consumer demand.

The drop in demand for apple juice helped keep concentrate stocks elevated until recently. Apple juice accounts for the majority of non-orange-juice stocks of concentrate in cold storage, and non-OJ stocks hit a high of 441 million pounds back in November. Monthly volumes have declined precipitously since then, and April’s non-OJ stocks of 342 million pounds showed the first YOY decline since late 2019.

Consumers have turned away from juice in general, although the per-capita decline in consumption is most dramatic for orange juice, which fell by half between 2009 and 2019, when USDA’s most-recent data put per-cap OJ consumption at just over 2 gallons. Apple juice consumption, always a smaller slice of the pie than OJ but still the next largest source of juice in Americans’ diet, fell from 2.1 gallons per person in 2009 to 1.7 gallons in 2019. 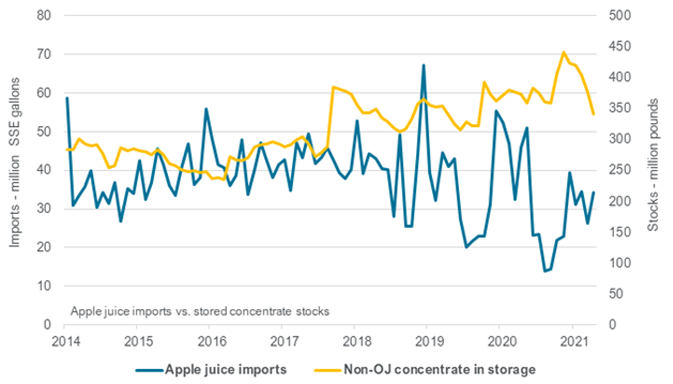