In its survey of the cost of a Thanksgiving meal, the American Farm Bureau Federation (AFBF) estimated the cost of ingredients for a ten-person meal at $53.31 ($5.33 per person), the highest price in the survey’s 36-year history.

Save for stuffing (down 19 percent YOY), most parts of the meal saw price appreciation, including turkey (up 24 percent), vegetables (up 4 percent to 12 percent), pie makings (up 7 percent to 20 percent), dairy (up 2 percent to 7 percent), cranberries (up 11 percent), and rolls (up 15 percent).

The 16-pound turkey saw the highest appreciation, but this may be partly overstated: Supermarkets and other retailers delayed deals and discounts this year vs. previous years. Shoppers buying this week may pay less for turkey than buyers one or two weeks ago when the survey was conducted. Supply chain uncertainty is presumably behind the tardy deals.

AFBF, an insurance company and lobbying organization, also tracks an updated basket of goods now showing up on Thanksgiving tables, such as ham, russet potatoes, and green beans. The price for this modern expanded meal was estimated at $68.72, up about 14.3 percent YOY. 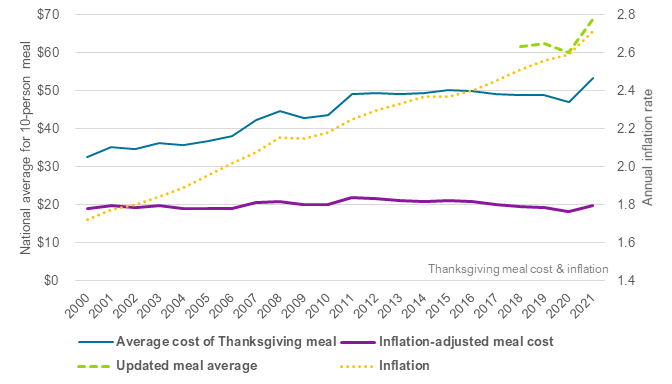