Harvest of new-crop cocoa has begun in Ivory Coast, with a farmgate price up 9 percent YOY. Ghana raised its farmgate price 21 percent YOY this week, but its new price is still below Ivory Coast’s in dollars. The disparity between Ivorian and Ghanaian farmgate prices will likely prompt some smuggling from the latter to the former—law-enforcement actions notwithstanding.

The harvest is expected to see a strong start, boosted by old-crop stocks held back in anticipation of these new-crop price increases—presumably driven in part by dollar strength and concerns over rising production costs, especially the crops of inputs like pesticides and fertilizers.

Dec-22 London cocoa remains in its three-month bullish channel, breaking prior resistance near £1,940 Wednesday to settle at £1,963, just below the upper Bollinger Band. Support may be below £1,930 and at multiple levels from £1,910 through £1,885. Resistance may lie near £1,965 and below £1,975 and £1,980. RSI is strongly bearish. MACD grew more bullish. The stochastic showed nominal bullish crossover but is near overbought territory. 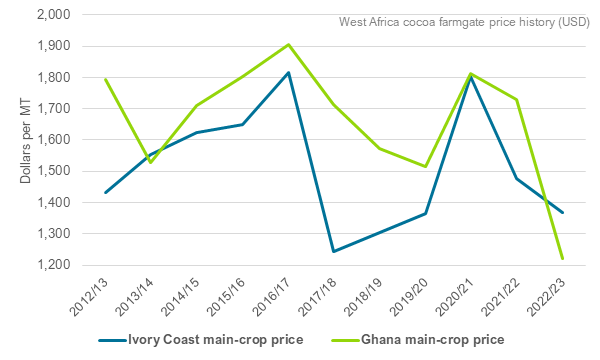